You are at:Home»Halloween»63 Best Halloween Door Decorations for 2023 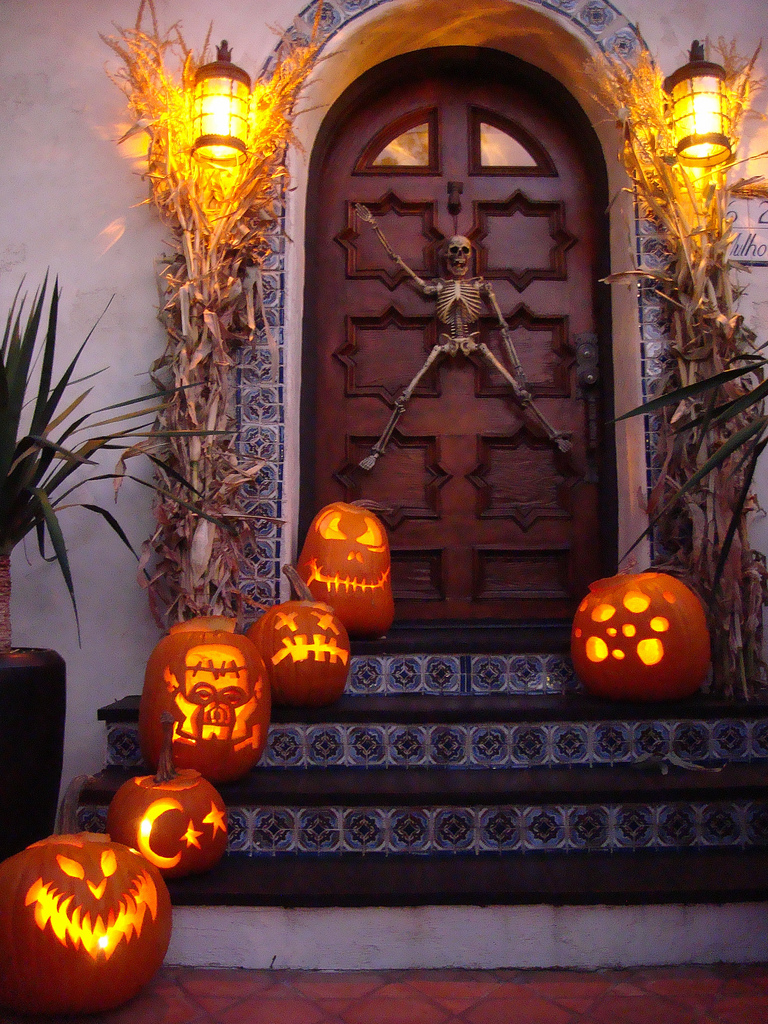 For a creepy look, hang a full skeleton on your front door! The fun thing about the plastic skeleton that is used for this craft is that it can usually be positioned in any way that you desire it. It can be positioned to be jumping, waving, or even doing the splits. With pumpkins on the steps or the porch and cornstalks to either side of the door, there is so much that can be done to accent the skeleton. However, the skeleton is the centerpiece of these DIY Halloween front door decors. 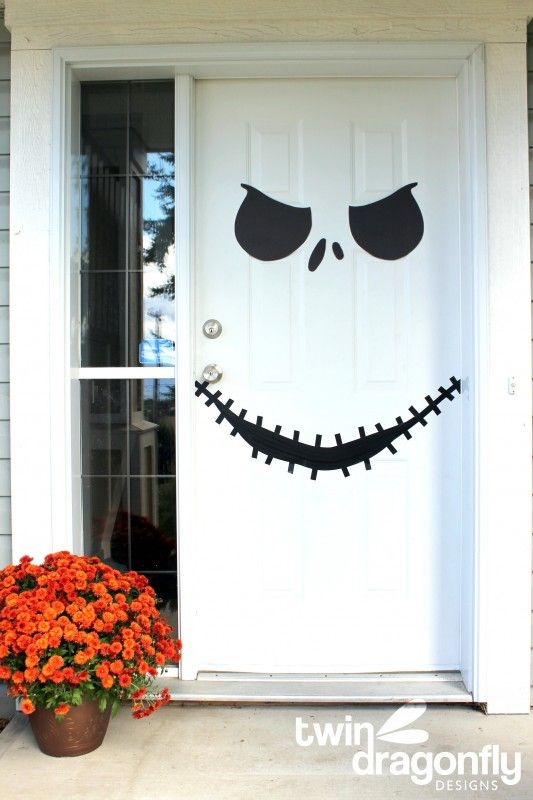 For any Tim Burton fan, this front door decoration is a must have. The eyes, nose, and mouth look reminiscent of a famous skeleton from a movie. Hint, hint. It’s easy enough to create: vinyl or construction paper can be used to make the face. It works best if the door is white. However, if the door is not white, white construction paper can be used to create the background before adding the face. If this is the case, make sure the knob is uncovered. 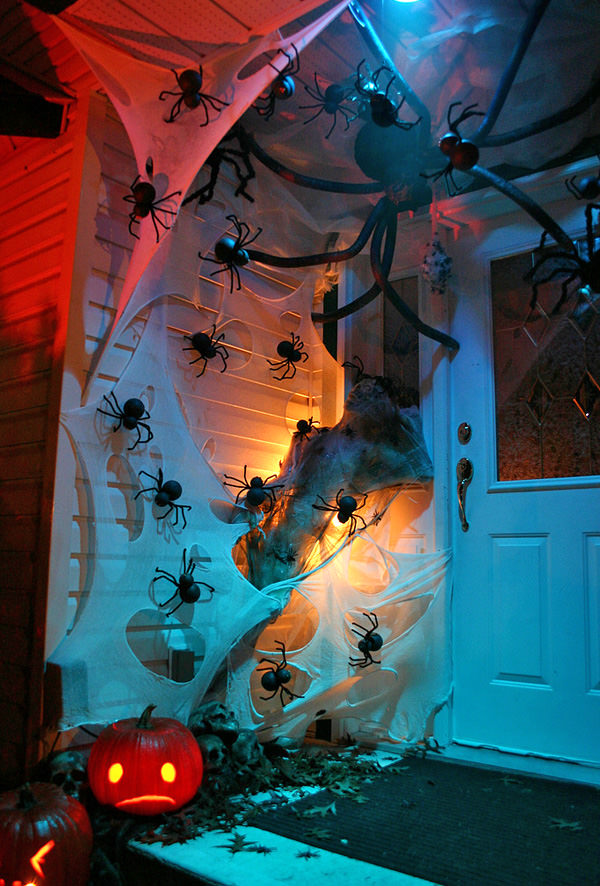 A giant inflatable spider can be difficult to incorporate into a Halloween porch. However, getting a bunch of smaller, plastic spiders can make the larger one feel at home. With fake spider webs made of sticky fabric or tulle with tape, the attack is on. If the large spider is almost too big for the porch, it can sit so that it is attacking the front door. The possibilities with this one are endless. A sad faced pumpkin can add just a touch of whimsy. 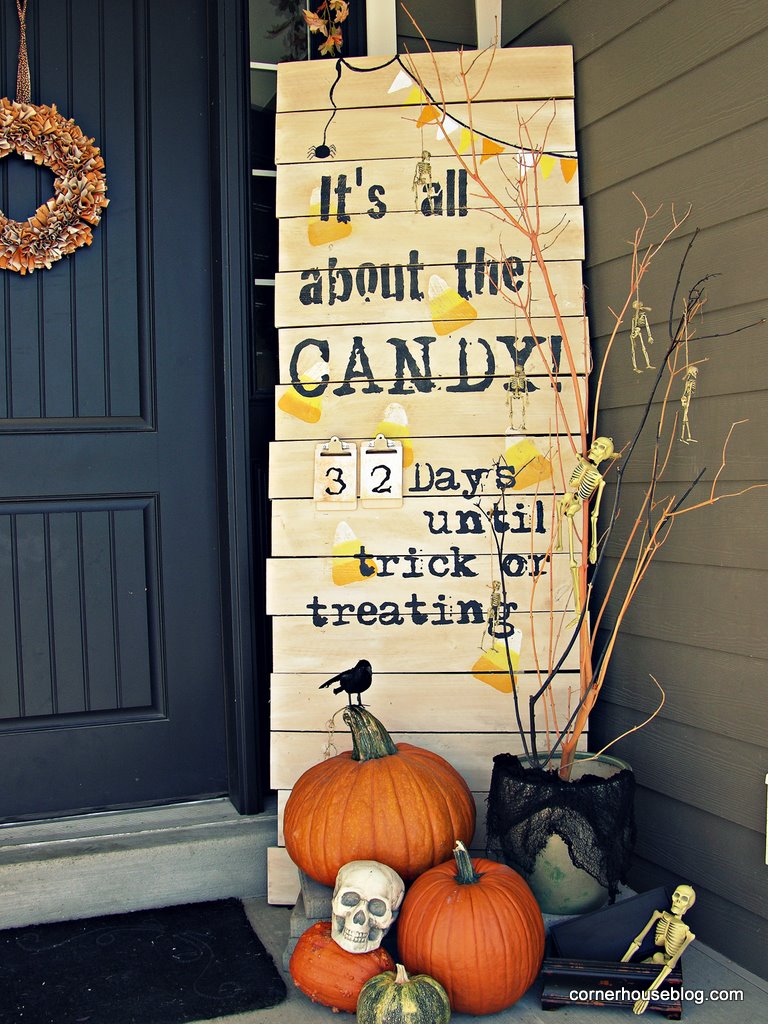 This is a good month-long Halloween front door decoration. Taking wooden planks and spray painting the phrase “It’s all about the CANDY!” on them is a start. For a bigger sign, the phrase “…Days until trick or treating” is added and two mini clipboards with the number of days left are also glued on. Candy corn can be painted on for a true Halloween spirit in the sign. Crows would also create a Halloween theme on the sign. 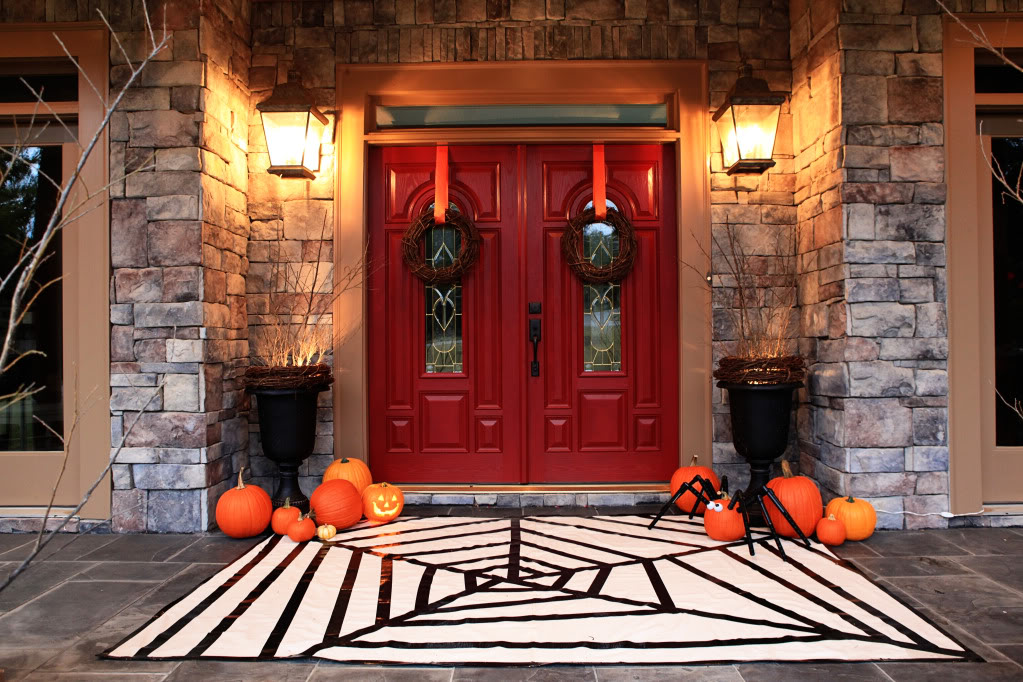 White fabric is difficult to use. However, using black washi tape, that white fabric can become a spider web. This also is inspired by a movie scene. The cartoon like proportions of the web are a little obvious, but it is a whimsical take on the classic idea of these cool Halloween decorations. A pumpkin with pipe cleaner legs is the spider, and that makes it even more whimsical. Two wreaths hang on the doors, but if your doors aren’t wide enough, one wreath will suffice. 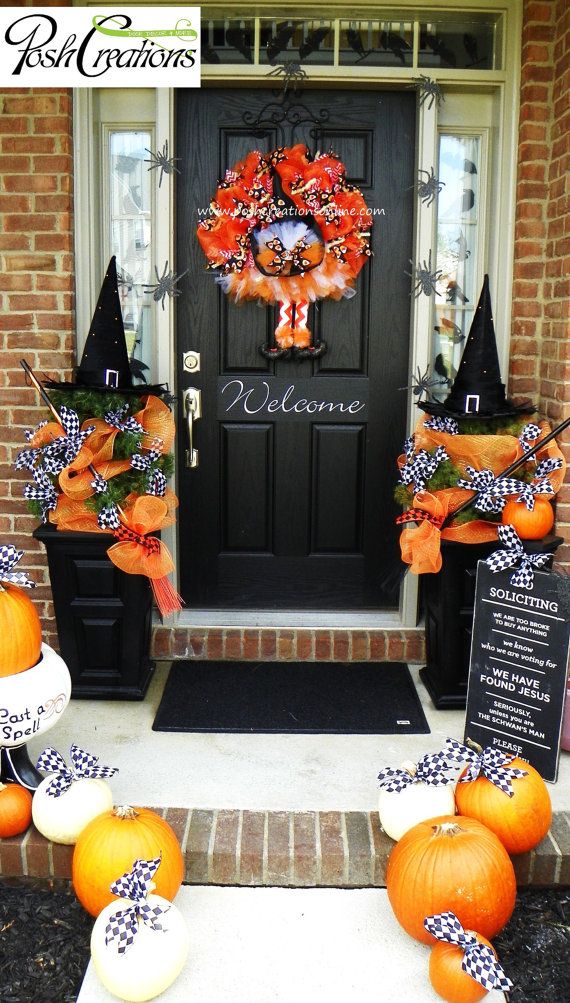 This is another take on a witch wreath. Orange tulle is the body of the wreath. Fabric has been stuffed to look like legs, and a mini hat – probably from a baby’s costume that is no longer used – is added to the wreath. A mini broom can be added to the wreath for a touch of whimsy. A black or orange pencil serves as the stick. Yarn is the broom part. It can make quite an interesting addition. 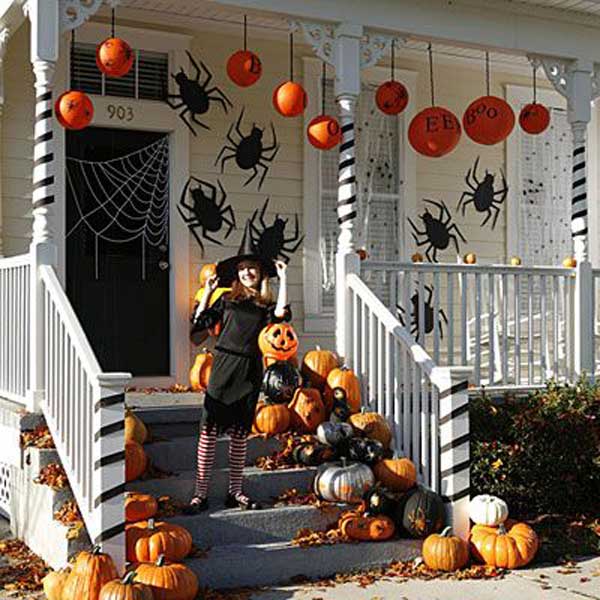 For the home of witches, this is a good idea. Pumpkins abound on the steps. Black, orange, and silver are good colors for this idea. Paper lanterns can be decorated with screams and ideas on the paper. Large spiders are traced onto black paper for a traditional look. For a whimsical or cartoon like look, the spiders can be traced onto different colored paper. Black crepe paper can be wrapped around the banisters, and string or yarn covers the upper half of the front door to create a spider web. With all the fancy touches, it is such a witch’s cave that it can make other Halloween decorating ideas go down the drain. 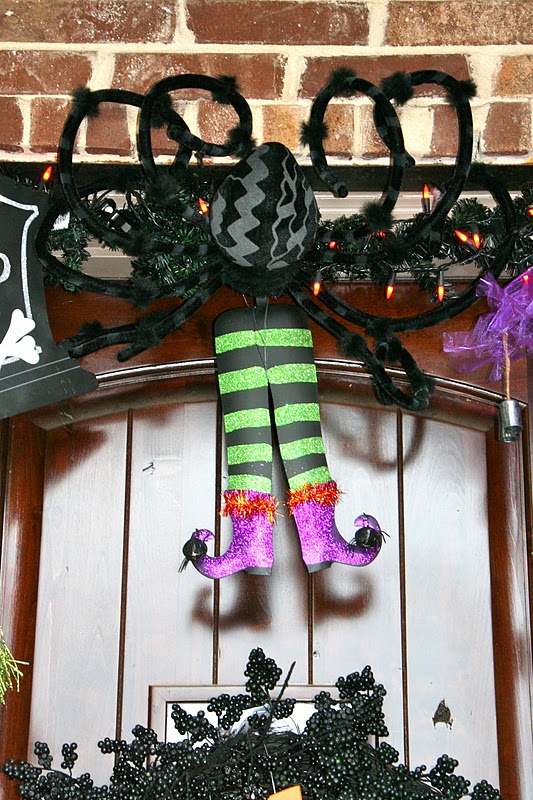 This is a twist on the classic end of the Wicked Witch of the West. Construction paper can be used to create the stockings and boots of the witch for these Halloween door decorations. A large spider is put at the top of the door, or on the post. Wire is used to create the illusion that the witch has been eaten. While this isn’t a good idea if there are going to be kids dressing up as witches, it’ll sure scare the eyeballs out of your neighbors. 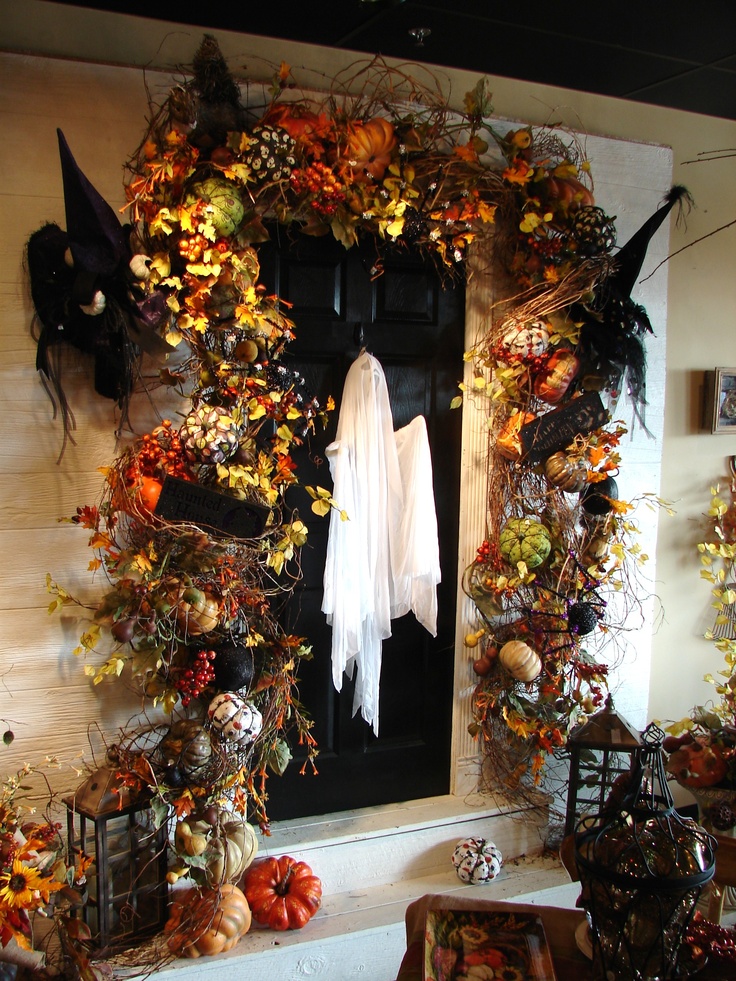 For anyone who has too many pumpkins and gourds to deal with, create an arch around the door. Fake witches can be put to either side of the arch. However, the piece de resistance is the ghost on the door. The ghost can be made of wire and white fabric, or it can be an old decoration from Halloweens past. Either way, it should look like a floating ghost who has just scared the life out of the inhabitants of the home. 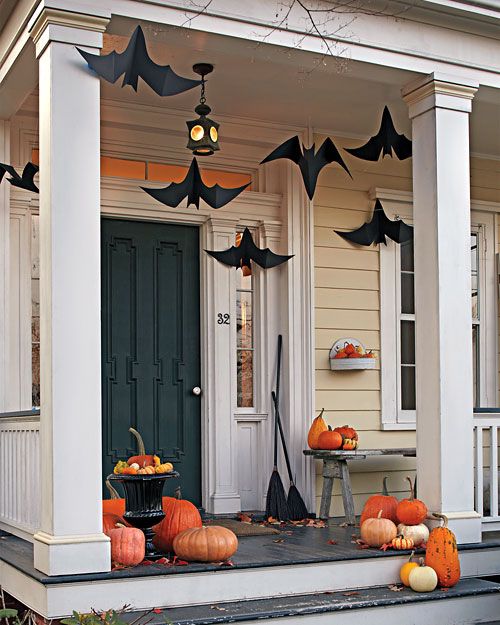 If putting bats on your front door isn’t your speed, trying hanging them! Fishing line is translucent and can give the effect of seeing the bats suspending in the air of their own choice. Creasing the wings can make it really look as if the bats are flying, and are about to attack your home out of fear or anger. Don’t mess with these paper bats.

39. Half a Pumpkin Halloween Door Idea 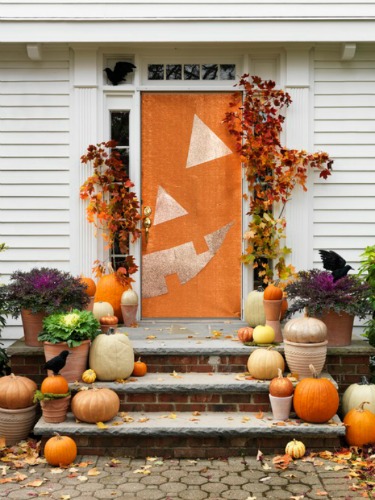 For a more whimsical idea, take a large piece of orange paper and cut holes for the knob and locks if you have them. One small triangle of a lighter orange acts as the nose. A larger triangle of that same orange is the eye. The mouth is cut out like the traditional mouth on jack ‘o lanterns, and taped onto the paper. The large orange paper is hung on the door, and voila. The door has become half of a jack ‘o lantern’s face. For the extra mile in Halloween decoration ideas, create the other half on the wall. 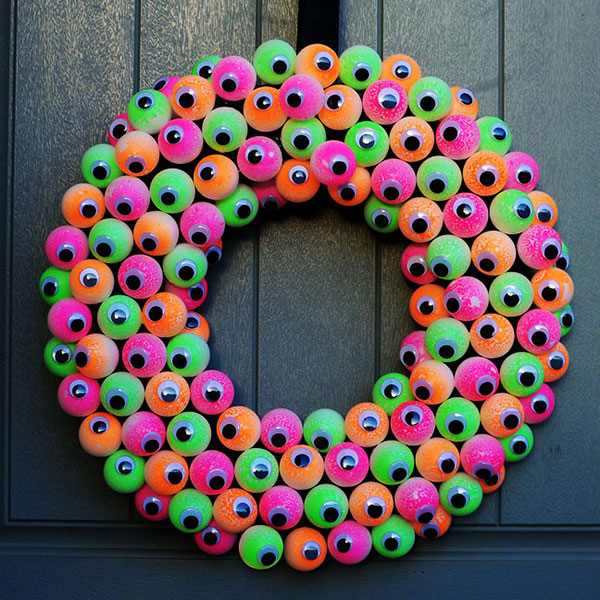 Create funky eyeballs by spray painting Styrofoam balls. Pink, green, orange, red, and even purple are all game for this craft. Once the paint has dried, small googly eyes are glued onto the ball, one each. Then the finished eyeballs are glued onto a plain wreath. The funky googly eyes will look in all directions, and boy will it freak some passers-by out. With the funky colors, it’s a kid friendly craft.

More Halloween door decorations on the next page…